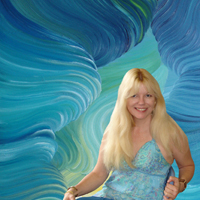 Ginny Gaura is a lifelong resident of the Chicago area, currently residing in North Aurora, Illinois. After graduating from Northern Illinois University with a BFA in Illustration, she went to work as a graphic designer and, for a while, continued postgraduate studies in painting. She built a successful 10-year career in advertising at the Chicago Tribune newspaper, rising quickly through the ranks to senior graphic designer. Though she enjoyed design work, she wanted to spend more time on her art. In 1999, she decided to take a considerable risk. She quit her job and devoted herself full-time to creating. “It was the riskiest decision I ever made,” she says, “But definitely the most satisfying.”

After leasing an art studio in late 2000, her paintings changed. “They came to life,” she explains. “I had been struggling with movement, working primarily from the spiral, but the artwork was stagnant; they reflected my life. My transformation came out in my work.” Her transformation continued as Ginny began training in Usui Reiki. This healing modality allows the flow of life force energy through the hands of a practitioner to a person in need. She went on to become a Reiki master three years later.

In addition to painting and exhibiting, Ginny also worked as a portrait photographer and muralist. Then in 2008, Ginny’s mother, Mary Ann, was diagnosed with Dementia associated with Parkinson’s Disease. Her mom’s health had been declining since the 2005 diagnosis of Parkinson’s, and it was at this point that Ginny decided to take time off from her career to be a caregiver. “I was glad that I was in a situation where I could be there for my mom,” Ginny said. “She cared for me at the beginning of my life, and I was there at the end of hers. It was truly a blessing.” Ginny remained a full-time caregiver until Mary Ann Gaura passed in 2010. Ginny later returned to creating art and working on design projects.

On December 12, 2012, Ginny published Fever or Forgotten Wings, a book of poems that trace her personsl spiritual evolution. It is available on Amazon.

In 2016, she created AliceAlways.com, which features an Alice in Wonderland character named Alice Always, who Ginny describes as “the little inner child within me.” AliceAlways.com is an inscrutably curiouser website about imagination, reality, and everything in between. Ginny believes that through imagination, we can all create a more loving and peaceful world.